Chair of the Committee 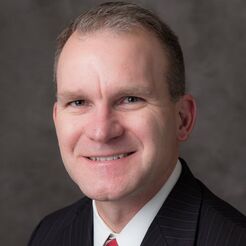 ​Dan Blakley is the Associate Vice President for Economic and Business Engagement leading ORED’s office with the same name.   Dan has been in this position since January 6, 2020.

Dan is well known in west Alabama and to the UA community.  He was City President for Regions Bank in Tuscaloosa from 2009 to 2018.  He also previously served as Chairman of the Chamber of Commerce of West Alabama and has served or is serving as President of the Black Warrior Council of the Boy Scouts of America, a member of Culverhouse College of Business Board of Visitors, DCH Foundation Board, and an ex-officio board member of the Tuscaloosa County Industrial Development Authority Board, among others.  He also currently serves on the board of directors for Mercedes Benz US International, the Tuscaloosa National Airport advisory committee, and ex-officio board member of the Chamber of Commerce of West Alabama.

Dan has also been involved in various entrepreneurial initiatives.  He helped to establish The EDGE and has served as an advisor and mentor for entrepreneurial teams participating in Crimson Startup, a National Science Foundation funded I-Corp Program.  Dan also founded American Renewable Metals, LLC, a Tuscaloosa-based technology company.   Dan has a bachelor degree in chemistry from Southern Illinois University.   Dan also previously served as an officer in the US Army from 1996-2000 where he provided nuclear, biological, and chemical support.   Dan is also a graduate of the Alabama Leadership Institute.