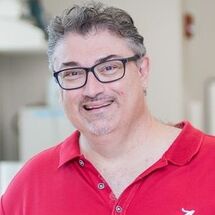 Dr. Guy A. Caldwell arrived at UA in 1999 following postdoctoral fellowship training in neurogenetics at Columbia University in the lab of 2008 Nobel Laureate, Dr. Martin Chalfie. He has risen through the ranks at UA to his current appoinment as University Distinguished Research Professor. He is a past recipient an NSF CAREER Award and was named a U.S. Professor of the Year by The Carnegie Foundation. His research has been consistently supported for over 20 years by the NIH, NSF, Howard Hughes Medical Institute, various foundations, and industry. A devoted cat daddy, and an avid lover of music, Dr. Caldwell admires individuals and organizations that invest in themselves to maintain a level of long-term excellence – as exemplified by his fervent support of The Crimson Tide, New York Yankees, Manchester United, and The Worm Shack – Roll nucleotide! www.wormshack.ua.edu

Dr. Caldwell’s primary expertise is in genetic engineering and cell biology, with research interests in the area of  neurological disorders and neurodegenerative disease. The Caldwell Lab has established the nematode roundworm, C. elegans, as a model system with which to accelerate the path of discovery toward therapeutic targets for dystonia, epilepsy, Parkinson’s, and Alzheimer’s disease.  Projects in the lab have revealed insights into molecular mechanisms underlying the dysfunction and progressive loss of neurons associated with aging, in addition to uncovering chemical, environmental, genetic, and epigenetic modifiers of susceptibility or resilience to neurodegeneration.